On 26th July 2021 an advisory agreement was signed between the European Investment Bank and the Cluster of Hydrogen Technology, coordinated by the Pomeranian Regional Chamber of Commerce (RIGP).

The event took place at National Chamber of Commerce in Warsaw.  The event was attended by representatives of the Pomeranian Regional Chamber of Commerce (Jarosław Filipczak – President of the Board, Damian Mucha - Vice President of the Board, Piotr Maksyś - Director of the Cluster). The European Investment Bank was represented by Prof. Teresa Czerwińska - Vice President of EIB and Paulina Brzezicka - EIB Innovation and Financing Advisor. Mr. Tomasz Pelc, President of Nexus Consultants a company that has been operating and co-founding the cluster since 2017 was also present to comment the event.

The agreement was concluded within the framework of the InnovFin - EU Finance for Innovators initiative, part of the Horizon 2020 program, jointly supported by the European Commission and the EIB Group. It demonstrates their joint action in supporting investment in clean hydrogen technologies. The signatories want to stay in line with the EU taxonomy, including research, development and innovation in key hydrogen components and machinery (e.g. electrolysers, fuel cells, hydrogen vehicles) and R&D and demonstration projects for industrial end-uses of hydrogen.

During the event Jarosław Filipczak - President of the Board of the Pomeranian Regional Chamber of Commerce said:

- This is a very important day in terms of developing cooperation between the Pomerania Regional Chamber of Commerce, the Hydrogen Technology Cluster and the European Investment Bank. The concluded agreement is the third of its kind in the European Union, which proves the importance of this event. Plans of member states for decarbonization of their economies see the greatest opportunities in hydrogen technologies. A cluster bringing together both industry leaders and smaller innovative companies is becoming a partner in the implementation of hydrogen as an energy carrier, a fuel for the economy and society. Once again, I would like to personally thank Prof. Czerwińska for her involvement in the whole process, as well as the EIB and Cluster team for their assistance in determining common directions of actions and development strategy, which I hope will bring tangible benefits to Polish companies and economy.

- One of the main advantages of the European Investment Bank is the combination of advisory and technical support in the initial phases of the project with attractive forms of financing in later phases. This model works perfectly in developing and implementing new breakthrough technologies, including those based on the use of hydrogen. We hope that the agreement signed with the Cluster of Hydrogen Technology will be another step towards the promotion of hydrogen as an alternative to fossil fuels - says EIB Vice-President, Professor Teresa Czerwińska, who oversees EIB innovation activities in Poland.

- We are glad to start cooperation which will contribute to the development and implementation of new technologies based on renewable energy sources - concluded Piotr Maksyś, Director of the Hydrogen Technologies Cluster. 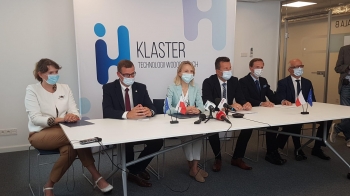 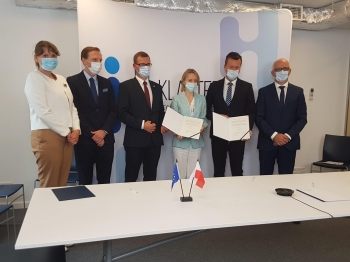